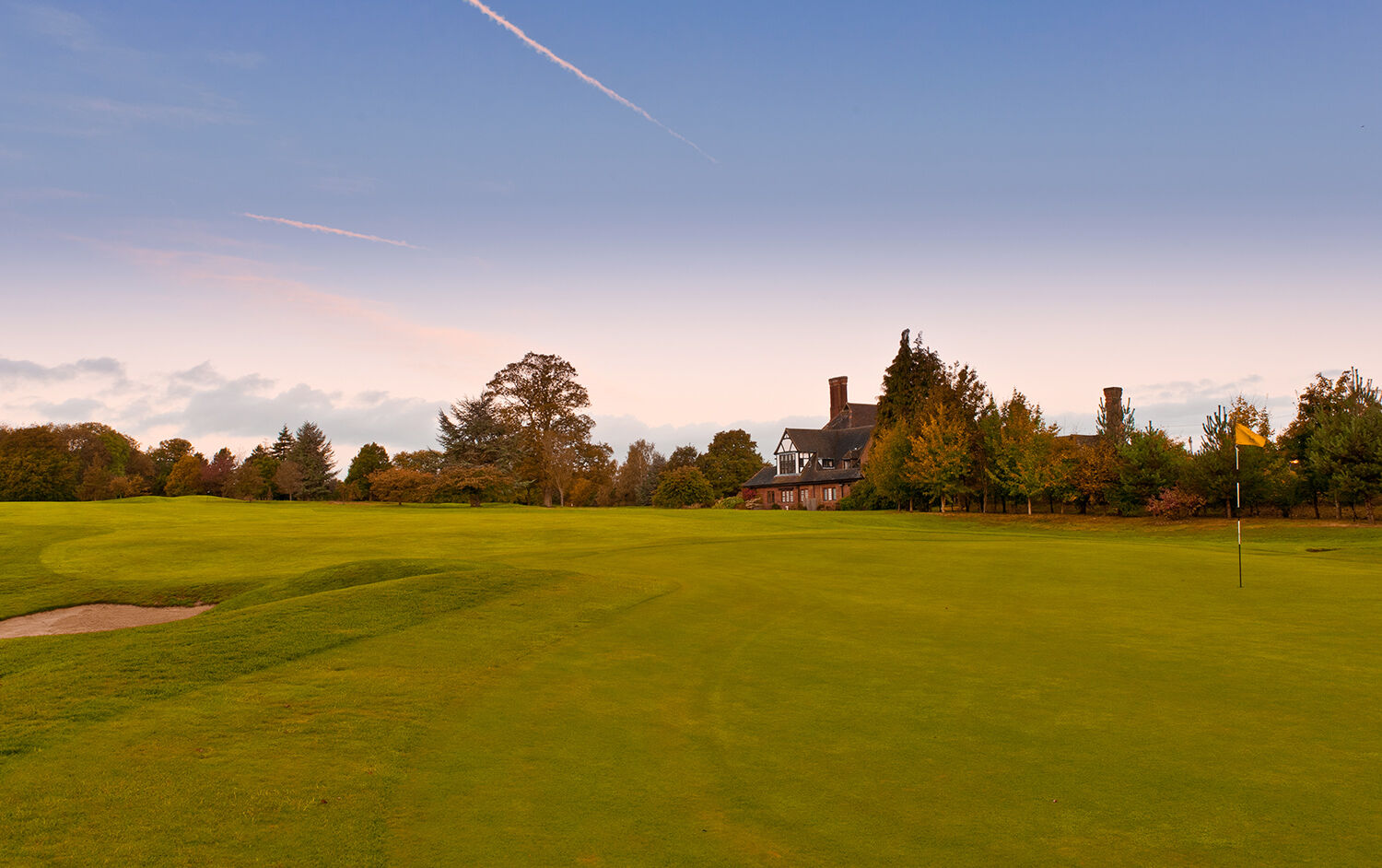 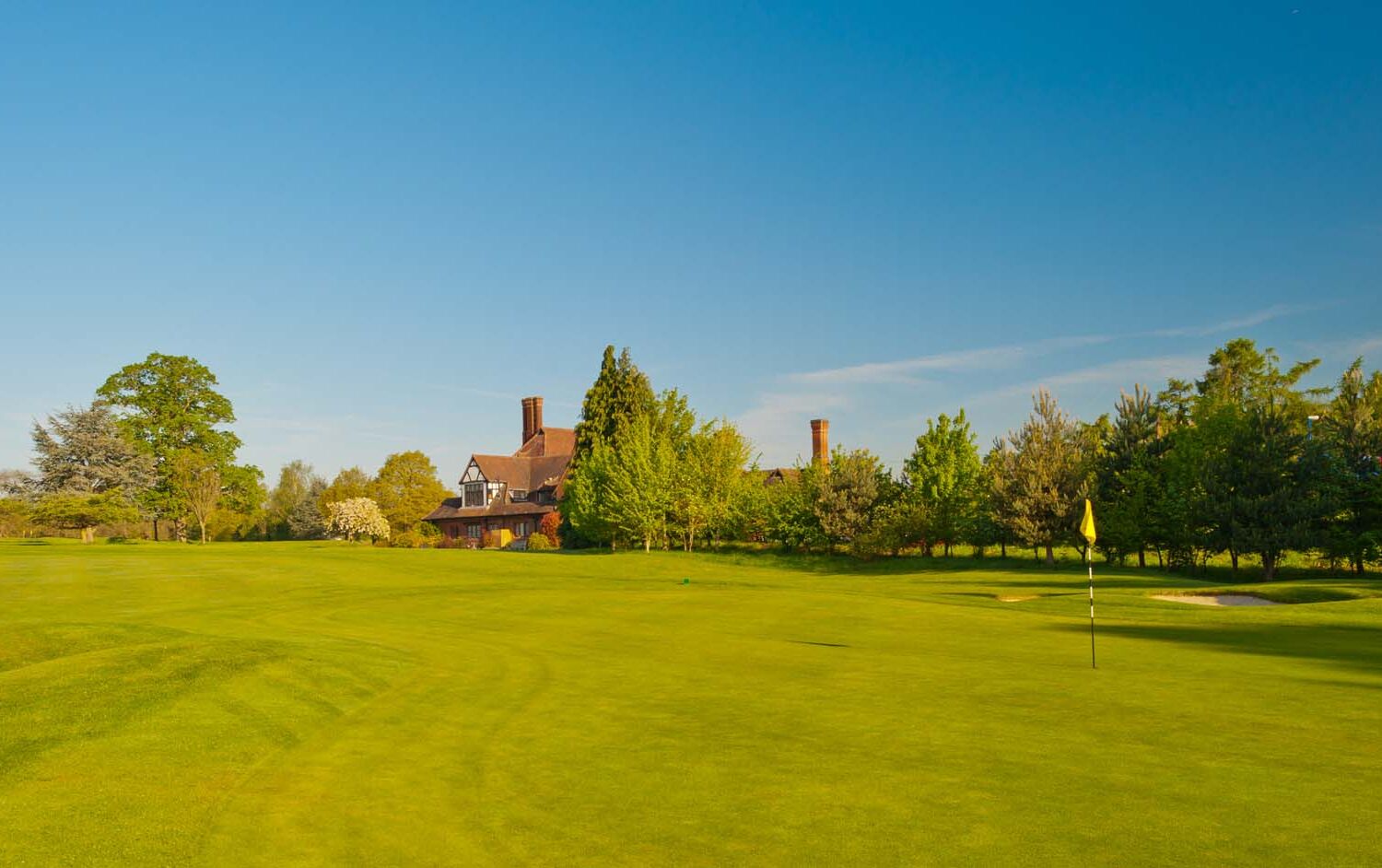 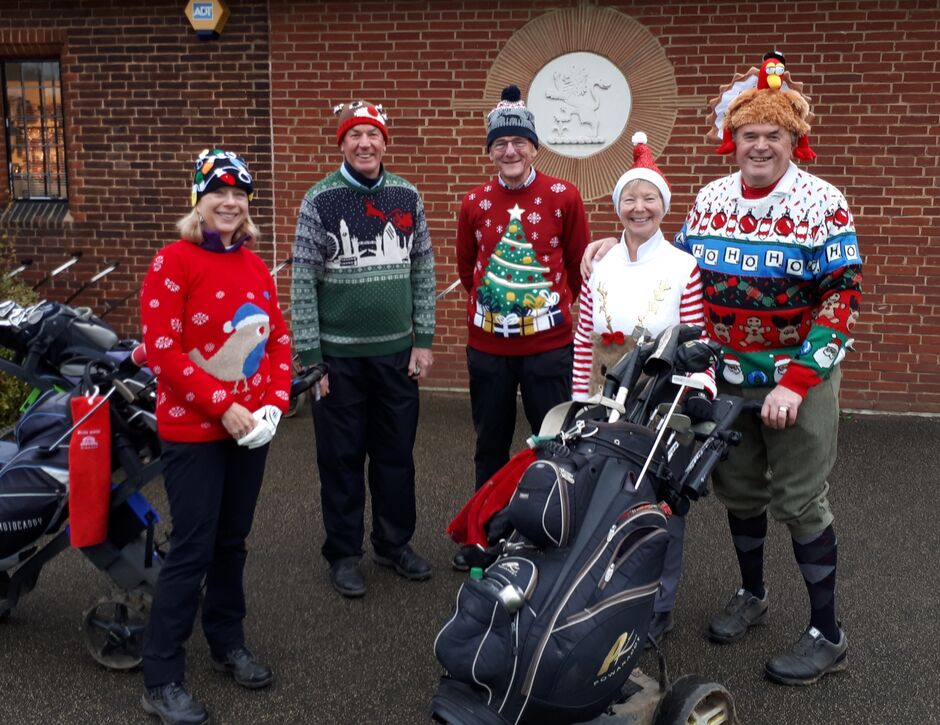 The Christmas Turkey Trot proved to be a huge success with a record 124 members taking part. The victorious team comprising: Iain Roberts, Stuart Morgan, Dave Carver & Andy Robinson collected a remarkable 97 points (best 2 scores from 4 to count). I enjoyed the rare treat of playing with my son, son-in-law and grand-daughter and even better finishing in the frame with 93 points. A big thank you to Sue Goodliffe who set up and managed the event brilliantly.

The Turkey Trot lunch proved a perfect occasion to mark Tim Whittaker’s outstanding achievement of making his England Senior Golf debut in the Home International series earlier in the year. Tim, who has been a Club member for 30 years and has won the Club Championship 6 times, deservedly joins the “wall of fame” at the foot of the staircase.

I am sure all members will be delighted to see that Gemma Dryburgh ended the year on a high note finishing 7th in Kenya. Let’s all hope Gemma's good form continues into 2020.

The Children’s Christmas party was as well attended (and loud)  as ever with 35 children being entertained by Funky Monkey's  and each receiving a present from our regular locum FC - Alec Mitchell. As usual the Christmas Sunday Lunches were very popular with David Jennings and Jeremy and their teams doing a great job.

A reminder that there is still time to make a contribution to the Staff Christmas Fund. Our staff do a great job and this is everyone's chance to give some monetary recognition.

Several members have remarked on a seemingly increasing number of members of the public walking on the course, off the public footpaths, and often with dogs off the lead. Naturally there is a general concern that such incidences will potentially increase as the planned housing and road developments kick in. Could I urge all members to politely point out to such people that perhaps they are lost and then re-direct them to the nearest footpath - their safety is an obvious issue. Please report any "difficult encounters" to the office.

Finally a Very Happy Christmas and healthy New Year to all members and staff and I hope to see some of you on Boxing Day (weather and family permitting!).

The ladies section started the month with a Christmas wreath workshop. Twenty two ladies attended and created either a traditional or a contemporary wreath. I believe that all the ladies went home with a wreath they could be proud of. Mary Van Wely made a contemporary wreath and I am sure you agree it looks good. 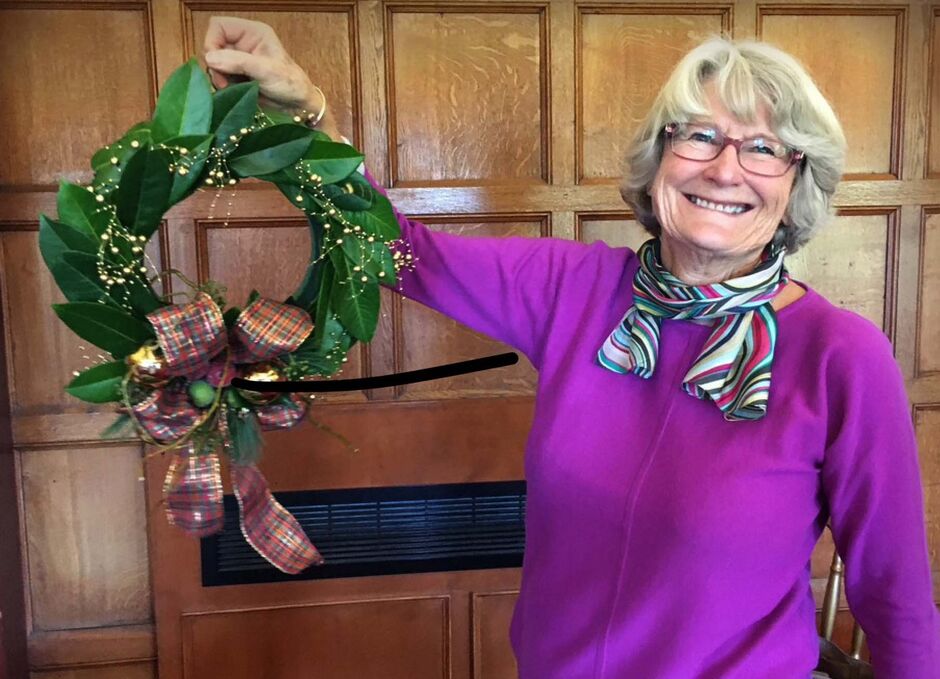 Our Christmas Foursomes was a bit of a washout with only 11 pairs going out to brave the elements. Those that did definitely deserved their delicious lunch produced by David and his team.

Gemma Dryburgh, who had just returned from playing in the Magical Kenyan Open where she obtained a very creditable 7th place, was our guest for the day. Due to the weather a raffle of the prizes was held for all the ladies on the starting sheet.

Our main raffle on the day, in aid of Rennie Grove Hospice, was for two hampers donated by the ladies committee. Thank you all for being very generous in raising £655 pounds for the charity. Mary Donegan and Maureen Murphy were the lucky recipients of the hampers. 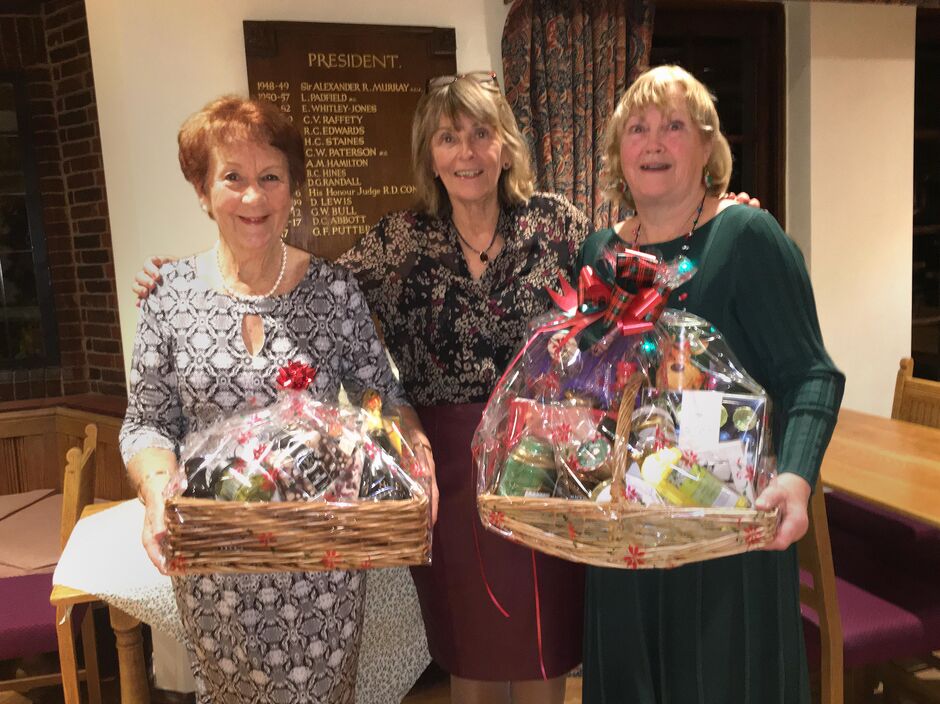 Our next main event will be our Charity Bridge Drive on Wednesday the 5th of February.

Our winter League results so far are a 3 0 defeat by Woburn and a 3 0 win at Ellesborough. With two more matches to go I wish them good luck.

I wish you all a Happy Christmas and good health next year.

This has been another great year with many highlights and individual achievements. The final event of the year was our Junior Annual meeting on Sunday 3rd November and our Club Captain Steve Lynch and our Ladies' Captain Barbara Harwood presented the many trophies to all the winners. This was a very special afternoon, when parents, grandparents, family members and friends come along to support their children. During the afternoon, our outgoing Junior Captain Ben Quick made a superb speech, reflecting on his very successful year, before he introduced the new Junior Captain James Casserly. 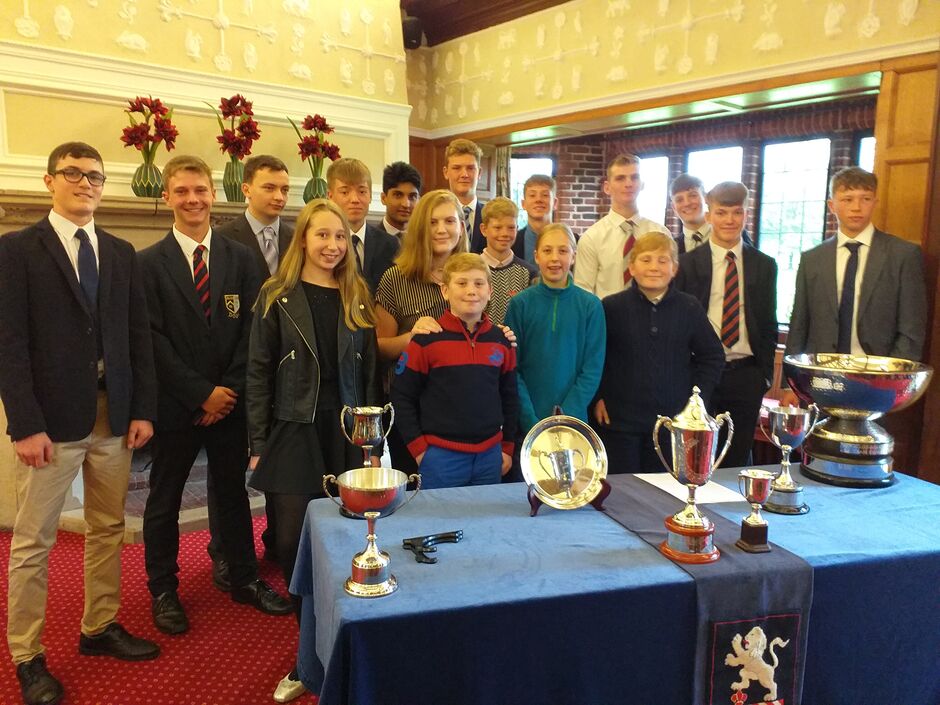 James announced his plans for next year, then introduced his new Junior Vice-Captain Tommy Evans. Together they will make a great team and will make sure that all our juniors enjoy next season. Congratulations to them both and we wish them every success for 2020. After the meeting, we all witnessed a fantastic drive by James (260yds) straight down the middle! The video of James's drive-in can be seen on the Junior webpage.

In last month’s Niblick we briefly broke the news that James Casserly and George Johnson, had achieved amazing results in the 2019 Junior European Open Final, which was held at Alcaidesa Golf Resort in Spain in November. This event was the 28th JEO and was open to all junior golfers in the UK as well as other countries. There were 45 Regional Finals staged across the UK and Europe from March to October and at each event, a minimum of two boys and one girl won and secured their places in the Champions Week Final, which was staged over five rounds, played on two of the top courses in Europe. In the Champions Final, the juniors played 4 scratch rounds, with their two best scores counting towards the cut. James and George both made the cut easily and after the fifth and final round, they both tied in 11th position with scores of 224, which was a remarkable result!!  We are all extremely proud of them - they are a real credit to Beaconsfield!!

The Winter has certainly arrived and although the next two months will be quiet for the Junior Section, it is the time of year when they concentrate on practising and ‘fine tuning’ their game, in preparation for next season. 2020 will be another busy year, so please watch out for the new fixtures on our website. 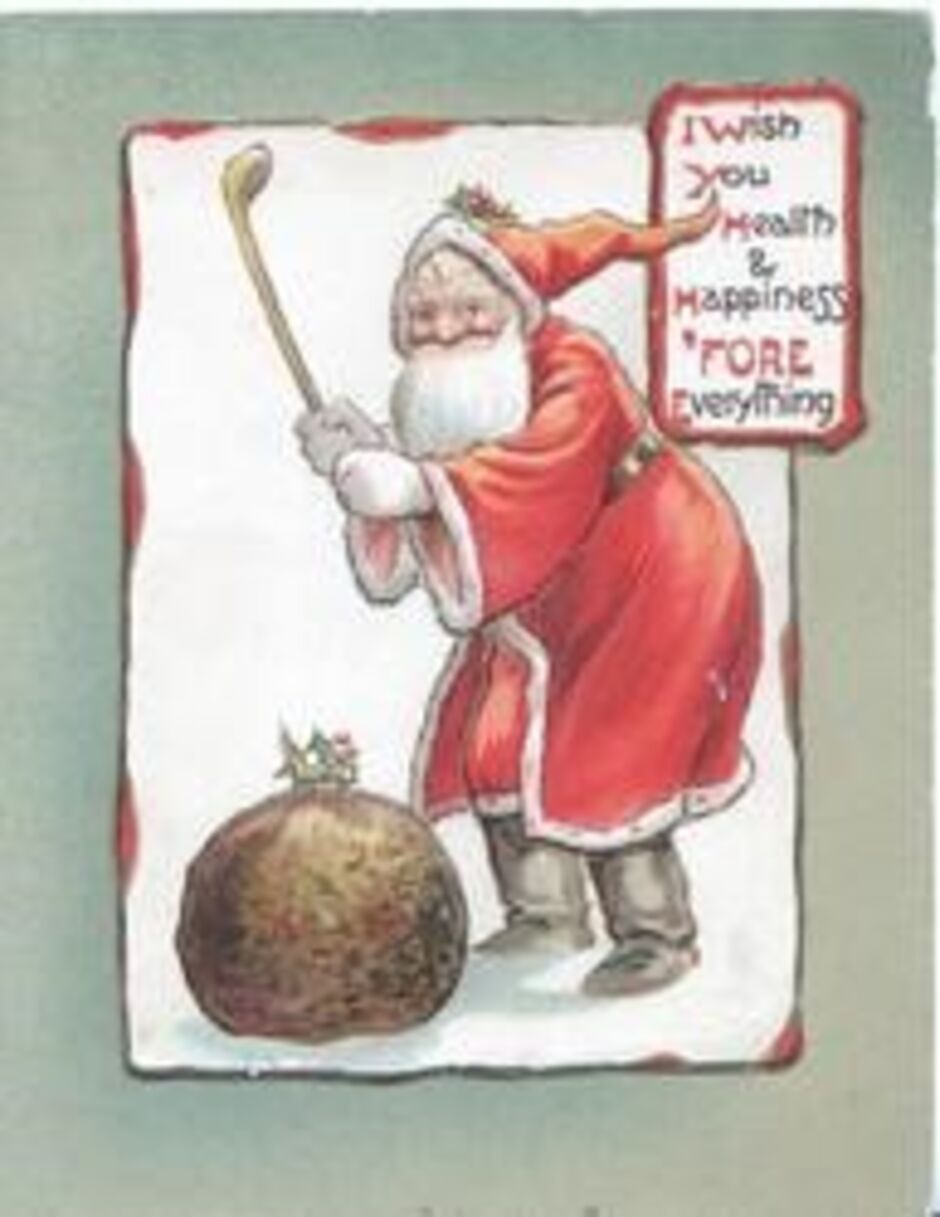 It will soon be Christmas, so warmest wishes to all our juniors and their families. Have fun over the holiday and then you can look forward to another great golfing year ahead.

The Board recently amended the Club's Disciplinary process and the following have been appointed to fill the roles set out in the Bye-laws:

After I had submitted my article last month about what to do if a crow steals your golf ball, I was reminded that not everyone understands the term ‘stroke and distance’ which I used in the article, so here is a basic explanation.

Stroke and Distance is the term used when you play a ball from where you last played.  It is called Stroke and Distance because you get one penalty STROKE and also lose the benefit of any gain in DISTANCE from your previous stroke.

Rule 14.6 tells you how to put a ball back into play from where you last played, as this depends on the area of the course:

If your ball is LOST or OUT OF BOUNDS your ONLY option is to take Stroke and Distance.

NB          There is a local rule available called Alternative to Stroke and Distance, which you may have seen publicised, but we DO NOT have this in use at Beaconsfield.

The greens are in good health having been recently fertilised and treated with their third and final fungicide of the year in an attempt to keep them disease free. The PCD rope drainage along with deep aeration when it is possible to get machinery to the greens is helping the putting surfaces cope with the 65 wet days from the last 85 resulting in 15.5 inches of rain making this one of our wettest years to date. The greens are currently being hand cut at 5mm and rolled 1-2 times per week.

The seed has begun to germinate on the new practice green which means it’s time to remove the grow covers. If left on the covers will make the new seedlings damp and prone to disease. A small fence has been erected around the perimeter of the green to reduce animal damage. The green will be fertilised every 2-3 weeks and rolled weekly. 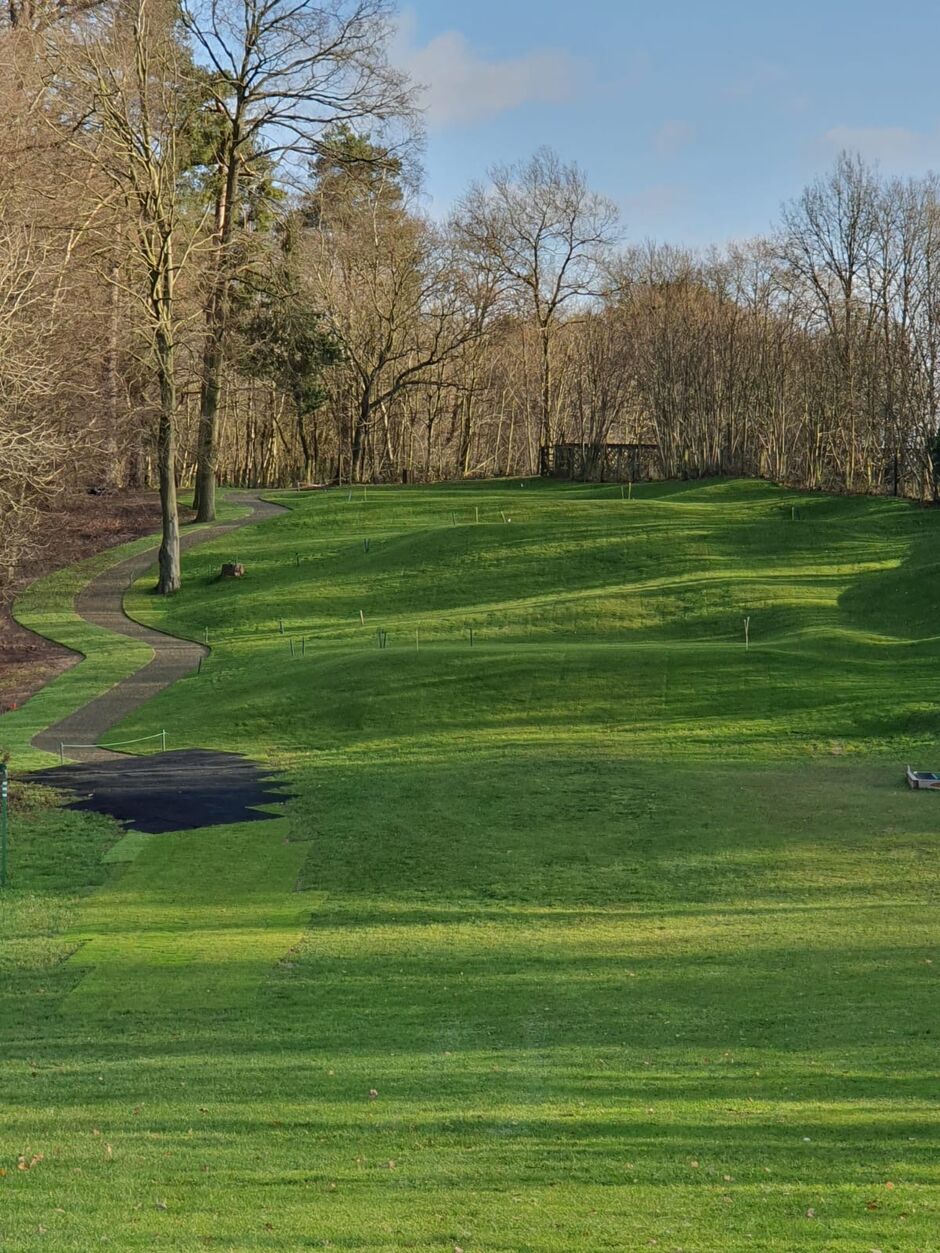 The 6th tees are now complete with the installation of a new colour coated rubber mulch path. The direction of the path has been twisted in and out to reduce its impact on the player’s eye when stood on the tee. All of the turfing including the removal of the original path has been completed with rubber ground reinforcing mats added to the new path end. The tee tops have been fertilised and will require rolling over the coming weeks to help smooth and compact the surface. Once the turf begins to root the new tee tops will be cut out ahead of the spring. The 14th tees are in a similar place with a small amount of drainage, turfing and rubber matting required after Christmas to finish the left side of the red tee.

The team are currently concentrating on the final leaf clear up of the year, blowing, mulching and picking up where needed.

The Social Committee would like to welcome you to come and play Around Ye Houses on Boxing Day.  This is a 7 Hole Foursomes Medal and has been previously played in groups of two, four or even six!  It is a fun event open to all, including guests and you will see the course in a very different format.  Players are welcome to play this event between 8.00am and 10.30am.  Christmas Jumpers, hats and tinsel a must!

There will be mince pies and mulled wine to welcome you in and a box for you to hand in your cards.  There will be a prize for the Winners. 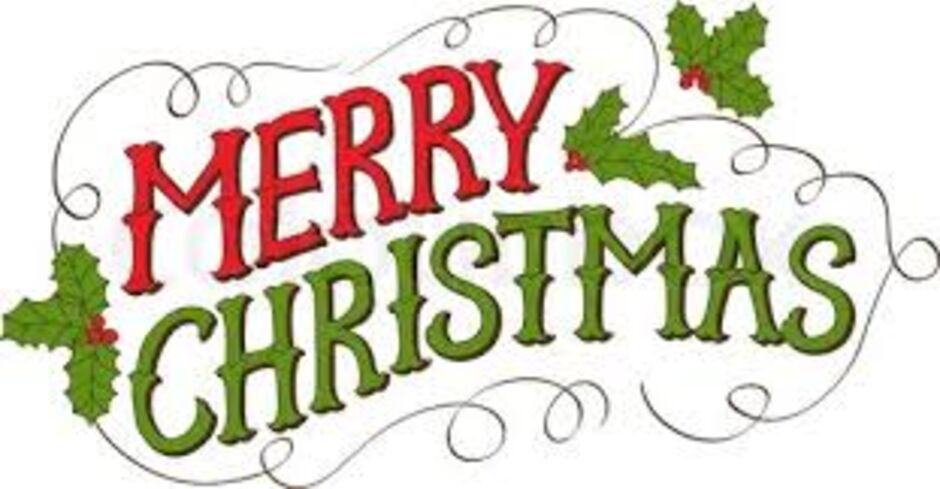 All of our Festive events were a great success.

The Turkey Trot on December 7th was the largest field yet.

124 players took part and 130 sat down for lunch afterwards. 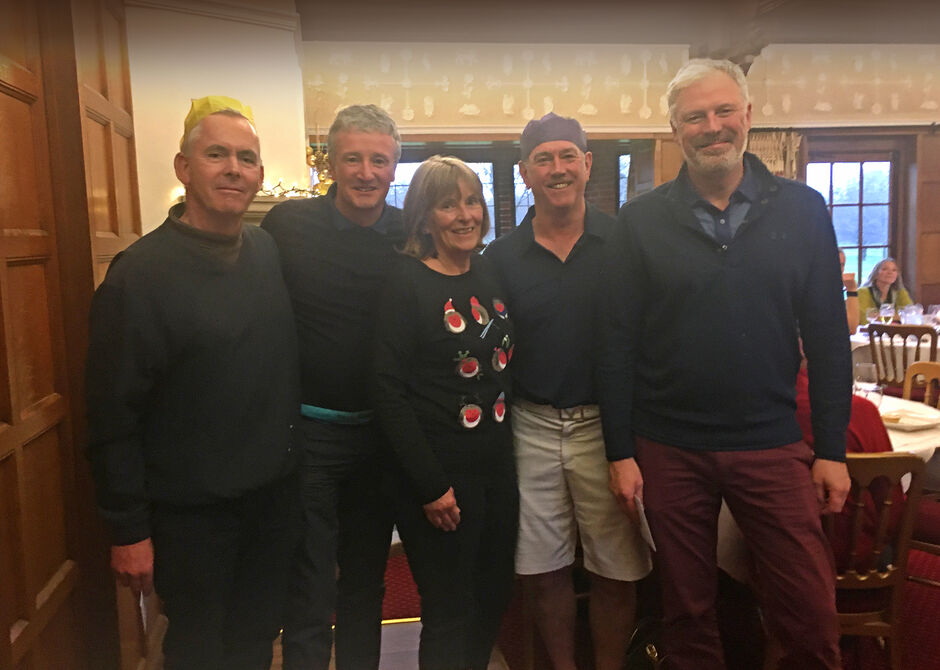 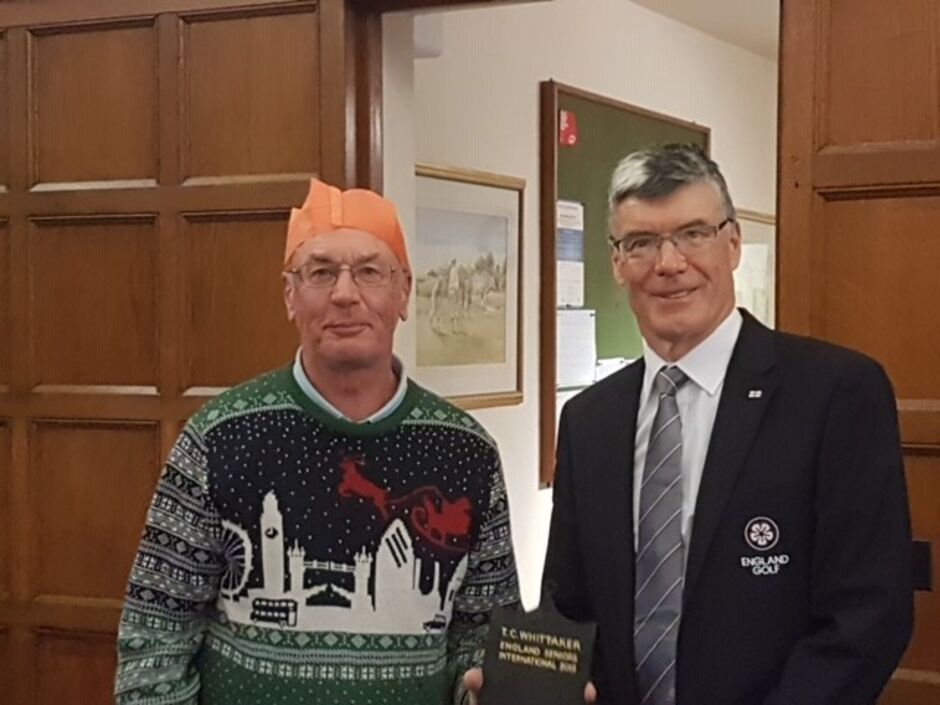 The first Christmas lunch on 8th December was slightly down on numbers but more than made up for by the volume of carol singing.

The children’s Christmas party on 14th December was very well attended and much enjoyed by children and adults alike.

The second Christmas lunch on 15th December was completely sold out and a great time was had by all of those attending.

The Quiz Night which is to be held on Saturday 29th February 2020 is fully booked and we are all looking forward to another superb evening, thanks to the efforts of Steve McAdam and his wonderful team.

The Social Committee are planning a Tribute Night in the spring along with other golfing and social events in 2020.

My special thanks go out to Sue Goodliffe and Sue Overall for all of their efforts in 2019.

I wish you all a very happy Christmas and New Year.

Click here to see all the Winners for the Trophy Competitions